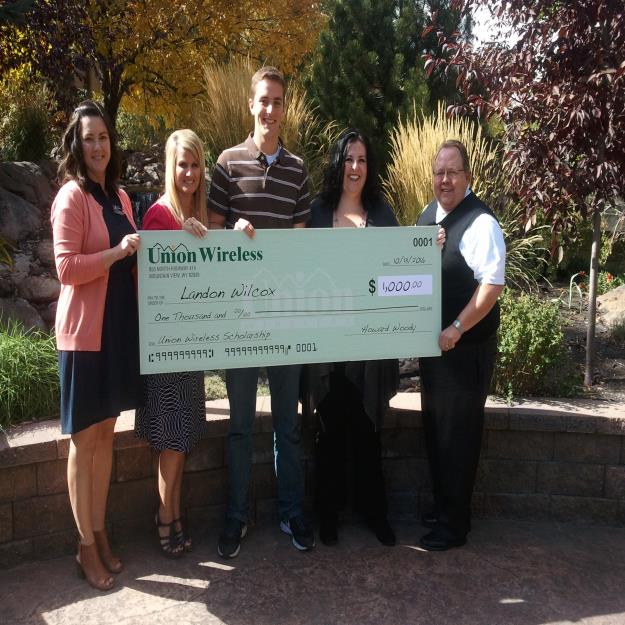 November 3, 2016 - Erik Sargent and Landon Wilcox are the two recipients of the 2016 Union Wireless Scholarships awarded to Utah State University Engineering students. Both students were honored at a luncheon hosted by Union Wireless in Logan, Utah on October 13th, 2016.

Erik, a junior majoring in computer engineering, plans to graduate in 2017 and pursue a career in software development and circuit design. He is the son of Steve and Linda Sargent of Logan, Utah. When asked about the scholarship Erik said, “I am honored for the support and recognition of Union Wireless. Their efforts to support the education of Utah State engineering students are greatly appreciated.”

Landon, also a junior studying computer engineering, plans to graduate in the fall of 2017. Landon is the son of Lamont and Heidi Wilcox of Farmington, Utah. “I’m overwhelmed by the generosity of Union Wireless. My sincere appreciation goes to those who made this scholarship possible,” noted Landon on being chosen as a recipient. According to Frank Draney, Director of Human Resources for Union Wireless, “The scholarship program was set up to support students in local communities who are interested in pursuing a technical field education in the Rocky Mountain region.” In addition to scholarships, Utah State students have worked summer internships and have accepted full-time positions at Union Wireless. “We feel these initiatives support students in their pursuit of excellence as well as enhance the partnership between our company and the university,” added Draney.

Jagath Kaluarachchi, Interim Dean of the College of Engineering, stated, “We appreciate Union Wireless for the scholarships which they give our students. By doing so they acknowledge that our students are receiving the education and knowledge that will make them excellent employees. We are very grateful for this support.”