Union Wireless Partners with Wyoming Food Bank of the Rockies 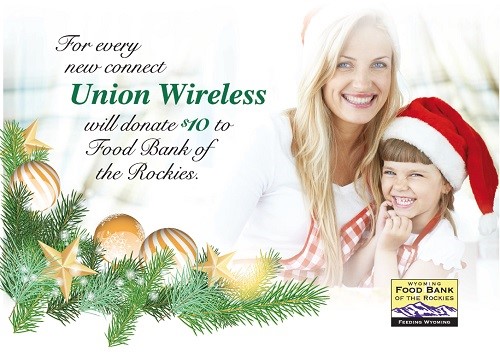 According to Brian Woody, Chief Customer Relations Officer at Union Wireless, “We are pleased to continue our relationship with the Wyoming Food Bank of the Rockies and help fight hunger in Wyoming. Involvement with organizations such as the Food Bank is just one of the many ways that Union gives back to the local community.”

“About one in every eight Wyoming citizens struggles with hunger, people of all ages and from all walks of life, particularly children and the elderly,” stated Shanna Harris, Director of the Wyoming Food Bank of the Rockies. “Corporate backing from companies like Union Wireless plays an important role in fighting hunger. Nearly half of the meals are provided through corporate support. We encourage everyone to donate food, funds, or time by visiting WyomingFoodBank.org. Together we can make a difference,” added Harris.