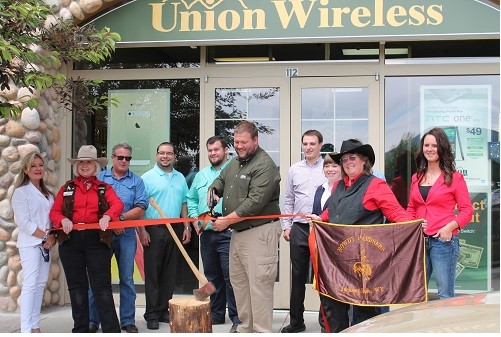 Grand opening festivities included free food, drinks and a very special one-day only in-store promotion featuring a free Google Chromebook laptop for new customers who sign up for service. “Beginning on Monday, June 23rd, we will be giving away free Bluetooth hands-free headsets as part of the grand opening festivities,” noted Woody.

According to Woody, “Union is preferred by the extraction, ranching, and farming industries throughout the region because of the investment the company makes in building out the network in areas typically non-serviced by the large national wireless companies. It is this investment in the tower network, the backbone of any wireless system, that keeps people connected in the city, the interstate and the outback.”

Union Wireless prides itself on the amount it invests back into Wyoming. “Since we started in wireless, we’ve averaged about $25 million a year in capital that goes back into the state,” added Woody. “We were born here, raised here, and we like to take care of the people in the local communities. Our goal is to continue delivering the latest and greatest technologies to our customers.”