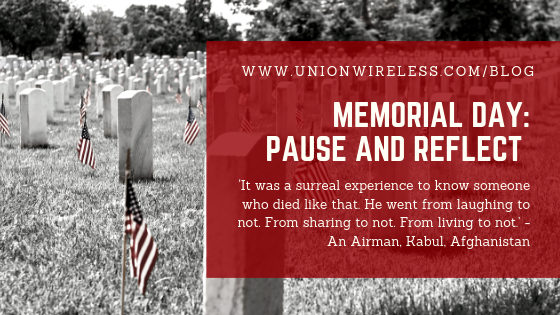 Memorial Day, aka Decorations Day, began in 1868 by the countless mourners that the Civil War had left behind. Over a million died, three percent of that era’s population. The trauma lasted generations, and with each additional war, the people sought solace as they mourned and remembered on a communal day of remembrance: Memorial Day.

A Comparison and Remembrances

Veteran’s Day celebrates all Veterans, while Armed Forces Day acknowledges those currently serving. Memorial Day, however, honors those who have given the greatest of gifts to their family, friends, and nation –their lives. Those who stood next to death and survived, know intimately what this day means. It is through the sharing of their experiences that we can learn of and appreciate the terrible sacrifices of war.

‘I remember, sitting with a new friend after a meeting. He was telling me about his family, job, and home back in Utah. The next day, he went out on a reconnaissance mission. The next time I saw him, he had a flag draped over his coffin. It was a surreal experience to know someone who died like that. He went from laughing to not. From sharing to not. From living to not.’ -An Airman, Kabul, Afghanistan

‘I was sitting on a rock eating lunch in the middle of the jungle with my squad scattered around me doing the same. The large stone was the driest spot, and I had claimed it first. I got up from there for a minute, and when I came back, my best friend was sitting on my dry spot, grinning. Before I could tell him to get the hell off, a bullet whizzed by me and struck him in the face. He died instantly. From then on, I was never the same.’ A Vietnam Veteran

“…Howard was wounded defending himself against a German soldier….(He) recalled: “This German, he was in a hallway. He pulled his rifle up and fired at me. I heard his gun click. He stood there for a minute, and I stood there. I just lowered my rifle down. He started running toward me, and then I seen him raise his rifle up. And he had a bayonet on the end of it. I thought, “Is he gonna stop?” All of a sudden, I realized he wasn’t gonna stop, so I raised up my carbine and shot him…I hated to kill him.” -SGT Howard Woody, WWII

How to Honor the Fallen on Memorial Day and Every day

When you encounter a member of the armed services…thank them for their service.

When the flag is raised…stand and be respectful.

When a Veteran shares a story…listen.

When you discover a widow of a Veteran…seek for an opportunity to serve them.

When you visit a graveyard and find a Veteran’s grave…pause and reflect.