Bitcoin: On Track for Change 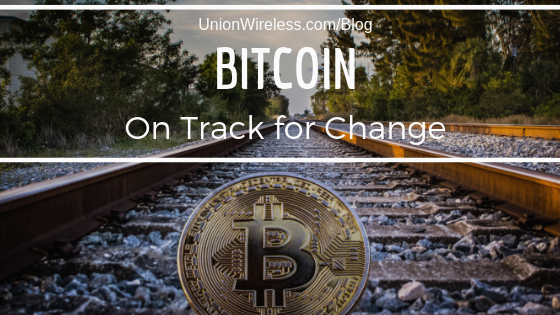 Bitcoin was digitally born in 2009 by a mysterious man named Satoshi Nakamoto. No one knows who he is or even if he is a she or a they. The Bitcoin concept is outlined in a white paper entitled “Bitcoin: A Peer-to-Peer Electronic Cash System.” You can read this paper by going here.

Nakamoto had one goal: attempt to lessen the percentage of fraud by creating an electronic payment system based on cryptographic proof instead of trust that allows any two willing parties to transact correctly with each other without the need for a trusted third party (banks).

If you have never even heard of Bitcoin, here is a quick synopsis of what it is:

Bitcoin is a type of digital or cryptocurrency. Crypto is short for “cryptography”, a computer technology used for securing and hiding information. Bitcoin is a currency in which a record of transactions is maintained, and new units of currency are generated by the computational solution of mathematical problems―it operates independently of a central bank.

There are no physical Bitcoins. The balances are kept in the cloud on a public ledger. Each Bitcoin is keyed with long strings of numbers and letters which ensure their viability. The amounts are verified through massive amounts of computing power.

Bitcoin is not backed by banks or governments and individual―even though they are not officially legal tender, they are also not illegal in most countries. As a result, Bitcoin is becoming a globally valid form of payment.

How do I get Bitcoin?

As of May 2018, the total value of all existing Bitcoins exceeded 100 billion US dollars, with millions of dollars’ worth of Bitcoins exchanged daily. There are four main ways to acquire Bitcoin:

How does this affect me?

Digital currency is not going anywhere anytime soon and has three major things going for it ensuring its longevity: it is fair, accessible and easy to use.

- Fair: The transaction fees are low and, since Bitcoin cannot be created or devalued by governments, it is immune to inflation.

- Accessible: Via mobile phones, you can access it 24/7 anywhere globally. This is especially liberating for the millions of people around the world who           do not have access to a bank.

- Easy: Just like Apple Pay, you can instantly pay a bill with your mobile wallet―this makes it very easy to use.


For more information on Bitcoin and how to get started, go to www.bitcoin.org.